The benefits of being nearsighted

This morning on my way to work, I spotted two preppy, sporty-looking ladies walking with a golden retriever. This immediately prejudiced me in their favor because, you know –  goldens are maybe not quite as cute as those paragons of dogdom, the mutt or rescued pittie, but they are pretty nice.

And then it came to me: Gumby Hats! A la Monte Python! Two blond-bobbed suburbanites in $200 sneakers were sporting the knotted-hankie toppers that launched to fame the phrase, \”My Brain Hurts!\” 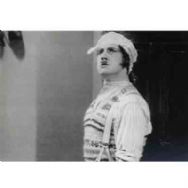 The dog was sensibly hatless.

So there I was, nearly in tears, about to drive off on to the opposite sidewalk in my glee, when I discovered, no: they’re wearing baseball caps.

And I suppose I should be concerned at the apparently imminent need for new glasses that this reveals, but I can’t help being tickled. It kind of made my day.

Filed under Not about books at all really