The dog has been skunked. Strangely, when he came zooming into the house at 4 a.m. after his close encounter with the skunkly kind, he smelled like… onions. Like a lot of onions – like he had been mugged by a roving band of onions gone to the bad; A Clockwork Onion, even.

Which I thought was weird, but was why I let him back into the bed — believing that he had just gotten into a patch of onion grass in the yard and comforting myself with the thought that the next day was laundry day. Despite repeated rounds of scrubbing, my bedroom can still only be described as “musky.” I did try incense, making the house smell like a skunk who wears tie dye.

This all got me thinking about books and smell. No, I will not be covering

Proust; this is not that kind of blog. We’re a little more lowbrow here. You can make your own madeleines if you want. 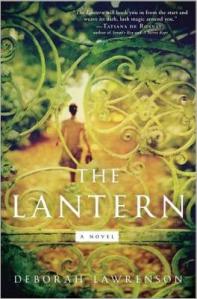 An homage to Du Maurier’s Rebecca, set in Provence. After a few chapters, I began to think that I could smell the lavender. In addition to being an elegant, creepy mystery with tons of style, The Lantern also gives the reader a smattering of fun-facts about the origins of lavender farming in the region.
The whole novel was so much fun I wish I could pick it up and read it again for the first time. It’s still in hardcover and is not getting nearly the amount of press it deserves. This means that you should just buy five or ten copies now, wrap them in holiday paper and be done in time to laze through both Halloween and Thanksgiving with an imperturbably superior air.
The Night Circus

This one is getting a lot of press. It’s a fun romp and very atmospheric. The scents here are caramel apples and bonfires, ashes and falling leaves, exotic perfumes and spun sugar, snow, and the vanilla whiff of old paper. It’s perfect to read on a crisp autumn night and is supposed to be made into a movie. The book is so visually lush that I expect great things from the film. The plot has to do with treachery and magic, artifice and attraction, imagination and romance (But not in a goopey way. And for the guys: it is safe to read this. You’ll like it).
One Salt Sea

Seanan McGuire’s October Daye series follows a fae P.I. through San Francisco crime scenes. By fae I mean that she’s a fairy, as in “the fair folk,” “the people under the hill,” “those folks who steal babies and sour milk.” There are a lot of paranormal detectives out there in fictionland these days, so I should clarify: If you were thinking, “pink and sparkly?” Not so much. Daye’s world is peopled by just about every living thing in western myth. There are centaurs and pixies and plenty of weirdnesses you’ve probably never heard of unless you had a Welsh grandmother who liked to tell stories and try to scare the crap out of you.
McGuire’s mysteries are always fun and always full of good sensory descriptions. For instance, the magic produced by an individual carries a characteristic scent – so does their blood. There’s a good deal of humor in these books too. Sometimes it’s dark, but sometimes it’s just funny. With this, her 4th mystery in the series, McGuire’s really on top of the game – One Salt Sea is a tight, layered, fast-moving who-done-it that nicely evokes the Northern California landscape. You can start with the first one, Rosemary and Rue, or jump in at the last – but keep in mind that these novels get better and better from book to book. Also, check out this writer’s blog. It is just flat smart. I particularly admire this entry and this one.
Back to de-skunking the dog. It’s a good thing he’s cute, because he sure is