It’s not easy being green

Back in the days when there was an iron curtain, it used to be that you could find unusual soft drinks behind it. A visit to then-Yugoslavia would see the limited-language traveler considering an innocuous looking purple beverage 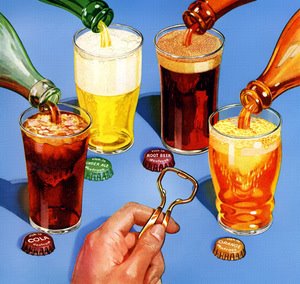 whose label she could not read, thinking, “hmm… grape maybe? Or some kind of berry flavor…” This would invariably turn out to be something like a plum shandy, leaving the drinker puzzled and dismayed.

It was as though Tito locked a bunch of collective farmers and all their harvest in a seltzer warehouse and said, “Don’t come out till you’ve put everything in bottles.”

With the collapse of the Soviet bloc, this unfettered creativity as regards drink recipes has slowly migrated to the west. Formerly predictable American refreshments are now just as weird. Today I ordered an iced green tea at a popular chain restaurant. It seemed simple: Green tea with ice. I was so wrong…

The liquid was actually green. Not the sort of pale, straw color that you expect from green tea; no, I mean something like light Kelly. And it was fruit-ish. I can’t identify the fruit. Its chemical bitterness led me to believe it was sweetened with some kind of fake sugar, but I can’t remember the zillion different kinds of fake-o-sweet we have now or what they taste like, so who knows?

Far from the same-old, same-old hegemonous culture that large corporate enterprise is said to produce, the North American soft drink industry has reached a truly Balkan level of ick . Soon I expect to be able to purchase at my corner store colas in a number of what I’ve come to think of as “astonished backpacker flavors.” These are inextricable from the mental image of other scruffy students with Canadian flag patches sewn to their rucksacks, gagging. Look for the following taste thrills in your next beverage:

Treacle with overtones of motor oil

and the ever popular:

It’s about time we got up to speed. Turn up the Euro Pop.

Filed under Not about books at all really