Ok, here is a “must read.” Normally, I hate “must reads” and, in fact, “musts” of many kinds. I must mow the lawn; I must remember to take more vitamin D; I must stop eating so much ice cream. Do you see what I mean? But sometimes good-for-you is just plain good, and that’s exactly what Before You Suffocate Your Own Fool Self  by Danielle Evans is.

Evans got a lot of press for the first short story in this collection, Virgins, when The Paris Review published it in 2007. And it’s compelling. But it’s the worst in the collection. That’s a bit like saying Chubby Hubby is the worst Ben and Jerry’s flavor. I would still greedily consume it, no matter how much more gooily satisfying I find Half Baked or Phish Food. So the point is, it gets even better from there. Virgins is an insightful and sensitive look at how what’s important to us changes – sometimes in a heartbeat, and a sly critique of teen society. Like the other stories in BYSYOFS, it treats race and class and sex and their various disadvantages with respect and subtlety.

Harvest, a couple of stories in, puts Virgins in the shade. It can easily stand along side Hemingway’s best short fiction. In fact, I’d like to see an AP Lit class do a little compare/contrast assignment with Harvest and Hills like White Elephants.

Snakes is an eerie love letter to southern gothic and smart as a whip. Really, I like all the stories in here. They’re not easy. That’s what makes them must read material. They teach you something, or maybe they ask you to teach yourself a little more about your own life – to look around at your choices, your family, your friends and see the poetry and the unexpected in them. Choose Before You Suffocate Your Own Fool Self for book club this autumn. And bring lots of wine, because it will start a fight.

The Birthday of the World and Other Stories by Ursula K. Le Guin came out 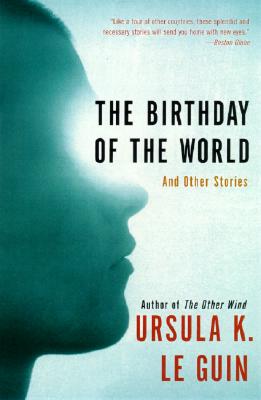 in 2003. It’s not new, but if you don’t follow Le Guin’s work, you may not have seen it before. Genre fiction makes me sad. Not because I don’t like sci-fi and fantasy novels, but because the best ones get short shrift. Important and beautiful and delightful literature gets shoved away on a shelf between novels whose covers tend to feature busty green women stuffed into plate armor, and things exploding. There’s nothing wrong with the green girls or the space station carnage, but they’re not really in the same league with, say, a Bradbury or a Le Guin. I mean, why not throw The Road in there next to the movie novelization of Mad Max beyond Thunderdome while you’re at it?

So: The Birthday of the World: It’s a collection of speculative fiction – mostly short stories with one long short story or short novella. My favorite short story of all time is included here: Solitude. When describing this tale, Le Guin said she wrote it because though the act of writing is a solitary pursuit, perhaps best suited to introverts, most fictional characters tend to be extroverts: people-people. What, she wondered, would a world built by introverts look like? Solitude is one of those rare works that combine a real hook of a plot with language and pacing that make reading it feel almost meditative.

Paradises Lost is the novella. It has to do with what a society sees as it’s greater purpose, and how that changes over generations. There are no easy answers here, but lots to make you think.

Weird but true: a friend of mine was once in an off-off Broadway play with this title. It was a comedy. He seems to have recovered nicely. What makes me think of it is a novel called The Gendarme by Mark Mustian. When disturbingly realistic dreams begin to take hold of 92 year old brain cancer patient Emmett Conn, he must decide what memories he can accept as real. This haunting story of the Armenian genocide reminds me of Chang-rae Lee’s A Gesture Life. It is striking, and like a recollected song, comes back to me at odd moments still. Look for it in September from Putnam.

Tagged as Before You Suffocate Your Own Fool Self, book reviews, books, Danielle Evans, Mark Mustian, Putnam, Riverhead Books, The Birthday of the World, The Gendarme, Ursula K. Le Guin