I’m cat sitting this week. I like all animals (some more than others – for instance, if a car salesman’s family were to go out of town for the week, I would not agree to look after him until their return). But I’m normally more of a dog person than a cat person.

This cat is a dog.

Her name is Nessie (after the chocolate, not the monster) and she comes when she’s called. She loves to be brushed. She’s a Persian and has more hair than any creature I have ever met. Beautiful, shiny hair, with all that brushing.

She does not fetch (so far), but then I’ve had dogs who wouldn’t fetch either. She is also affectionate to the point of self-destruction. Cat sitting almost became a literal description of what I am doing when she crept silently onto the the chair I was about to plunk down in this morning. 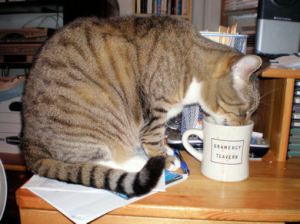 Not Nessie. Not my picture either.

She thinks she likes coffee. I am trying to persuade her otherwise. Worst case scenario: her people return from their vacation and I must report that their cat has not slept all week. So far I have been successful at keeping her away from caffeinated beverages, but she is persistent and my morning reflexes are not all that fast.

The whole thing does sort of remind me of Chet, the giant vampire cat from Christopher Moore\’s books. Except Nessie is a force for good. And all she wants is a coffee buzz.

Off to ply her with cat toys…

Filed under sort of about books